Continuing on my lost rolls, this set is essentially the last roll I shot in San Antonio before moving to Austin. It spans about a year as I wasn't shooting much film at this time having recently acquired my DSLR. There's a good mix of stuff here from my solo bando pieces to street shots in DTSA. I really genuinely miss shooting in Downtown San Antonio, there were always interesting people to photograph (when it wasn't dead). It's nice to revisit these last few memories of SA being out and about doing what I love. I left a little story below each image to provide some context. In any case, I hope you enjoy these images because I certainly enjoyed making them. 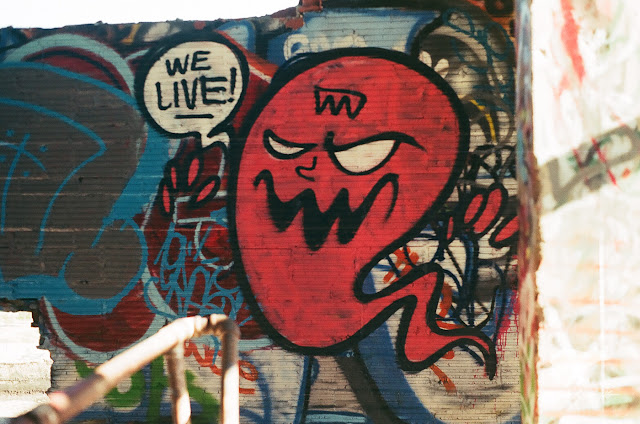 A new photog buddy I met through Street Keepers showed Ren and I and a few others this bando in Southtown which is now condos or apartments or some shit. This building was re-purposed and completed after I left so idk what it is today. Anyway, I came back by myself a couple of weeks later to get some painting in. During this time I had something to prove to myself--that I was still "down" to paint anywhere because at this time, I was losing my drive to do so. I packed my old Shorty's bag and resurrected this old ghost character I used to draw everywhere in my college years. I always wanted to further develop this creature but never got around to it. I'm glad I at least finally put it up on a wall at a much bigger size. 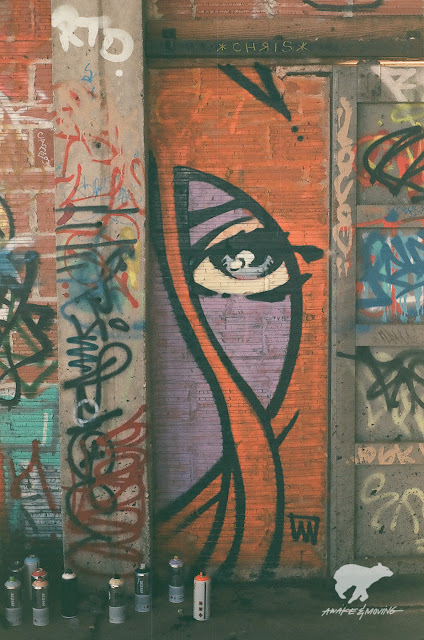 This was maybe the third or fourth piece I put in this bando. I essentially tried to leave my mark on every floor. In this instance, I was [poorly] channeling my inner James Haunt. Bandos, even in midday, are spooky and the threat of popo makes me jittery because the thought of getting arrested for painting decay is outright retarded to me. This day was actually the day I began leaving my name off of any of my work and simply using the reverted crown as a signature, which I've been using ever since. This particular spot on the wall was really linear and rather clean of paint. I had no idea what to paint here so I reverted to my comicbook days, painting a girl's flowing hair and chunky mascara. Word to Around The Fur. 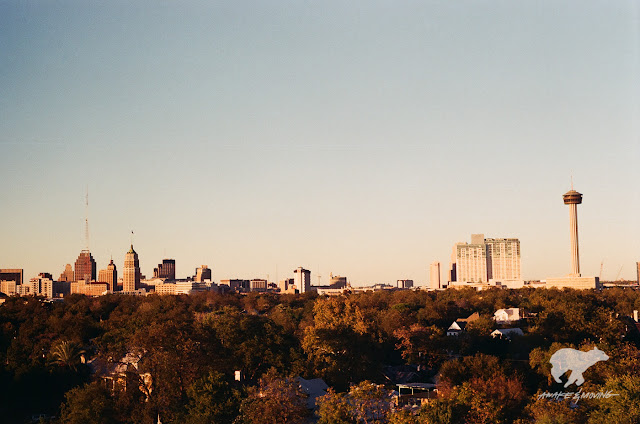 This view of Downtown San Antonio was taken at the very top of the bando looking out of a concrete window. I painted along the inside of it and then just sat and watched the city from this height. Something inside told me it would be one of the last times I would see this skyline, especially from this angle. I knew I would be leaving the city again, so I made the most of it and snapped this photo while quietly taking it all in. I probably spent the most of this day at the top just watching the city on one side and looking at the developing Southtown on the other. 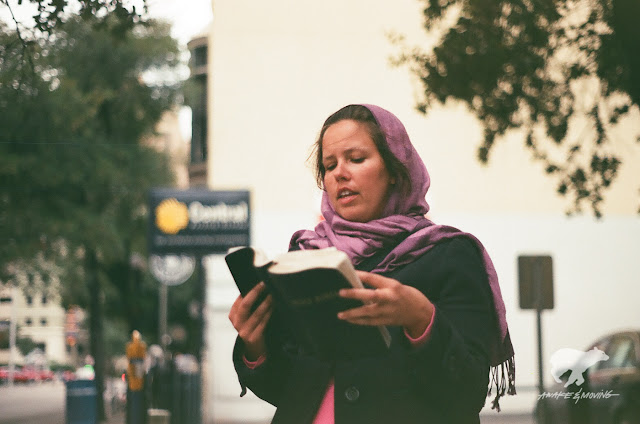 I couldn't tell you what day this is if I tried. I've spent so much time in DTSA after copping my DSLR that these street days have become a blur. This certainly isn't my first image of someone randomly preaching with a bible in downtown, but it's probably the only one I've captured on film. Not the sharpest, but I'm stoked it came out as clear as it did with that shaky lens. I believe this is on S. Presa, a block south of the Hard Rock. 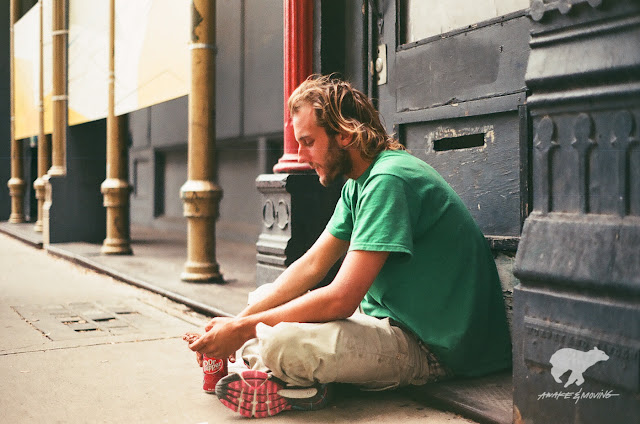 I used to see this guy a lot downtown and honestly, he always looked tweaked out on something. Most likely on Spice (K2, synthetic weed, etc.). It's sad to see what drugs do to people and, like the homeless, it isn't something I like to photograph. On this day though, from what I can remember, he seemed very quiet and "normal". Just another transient enjoying sustenance on the streets of DTSA. Wherever he is today, I hope he's doing better and is off the cheap drugs for good. 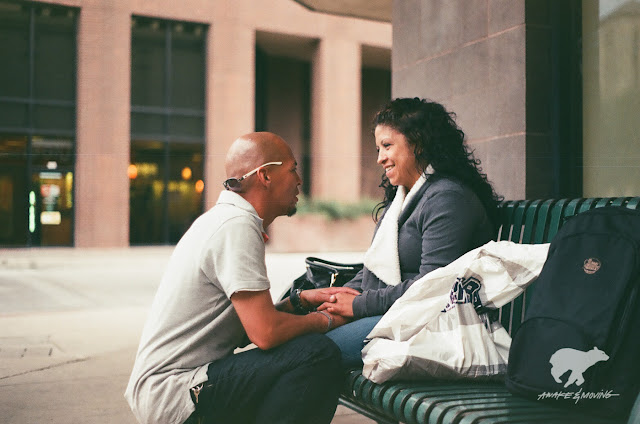 I came pretty close to getting into a scrap with this guy for this photo. The woman looked over at me, noticing me lining up my shot, but didn't say anything as this guy lovingly (or lustfully, take your pick) pleaded to her. I snapped and moved toward the crosswalk behind him. I guess at this point she mentioned my camera and he approached me, squared up and ready to throw hands. He asked what I was doing and why. My reply? The truth: "It was a really nice moment, man. I just wanted to capture it. It was a beautiful moment!" He nodded after realizing I meant no harm and gave me the non-verbal "Orale" nod and went back to his ruca. I fucking miss this corner so much. 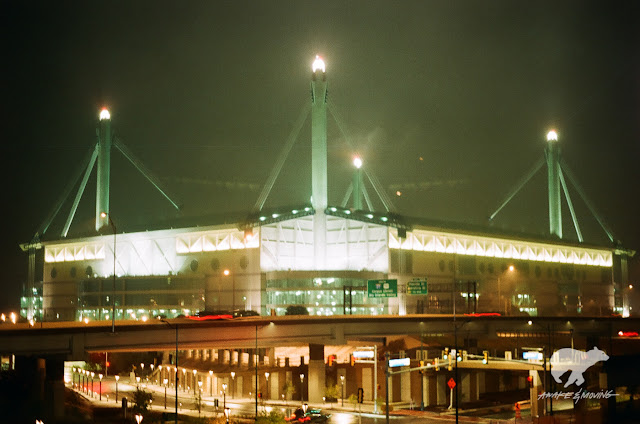 Former home of the multi-time Championship Spurs! Man, this image holds a special place for me even though, from a technical standpoint, it sucks lol. A couple of hours before this we were having our third SK walk, prior to when we even coined the SK name for our movement. During the second part of the day, I met Cory, Zero, and Vince. After the photowalk was "over", we continued into the night making our way to the Convention Center that was still under construction at the time (2014). We waltzed in, surprisingly easily, and climbed up to the second floor of the structure which didn't even have any walls yet. Just a few beams and barely a floor to walk on. It was cold, wet, and there were no lights. It's a view of the Alamodome that simply cannot be replicated as the Convention Center has since been completed. The reason this photo means so much though is that Cory and Zero have become great friends of mine since that day and we've had a lot of fun adventures together. It feels like so long ago, but also feels like it was only a few weeks ago.