An Urgent Return Home to LA In Search of Clarity.

Just as 2016 was winding down, it looked like a trip back home to California wasn't gonna happen. But intention is a mother fucker and I turned that ish up after summer. I hadn't been to LA in over 3 years. In fact, the last time I was in LA I was wandering about for a few weeks, trying to figure my life out. I eventually (albeit grudgingly) came back to Texas out of necessity, but the desire for Southern California palm trees burns just as hard inside today as it did then; if not, more.

This trip had a different dynamic than my SF trip last year for a few different reasons. One being that along with Cory, our homie Ren came along this time to get a much needed out from the Lone Star State. Another change in this road trip approach was more internal & personal. Speaking on photography specifically, I had been noticing a strong shift in Van Styles work this year. It's no surprise Van inspires so many of us, so finding that shift in myself was inevitable. Just before this trip I began making more effort to lay off the shutter and take my time. I've been making a conscious effort to focus on composition and observe light for longer periods of time before the click. Even if I "miss the shot". This is much easier to do when shooting film, which made it more exciting to challenge myself in the digital realm. 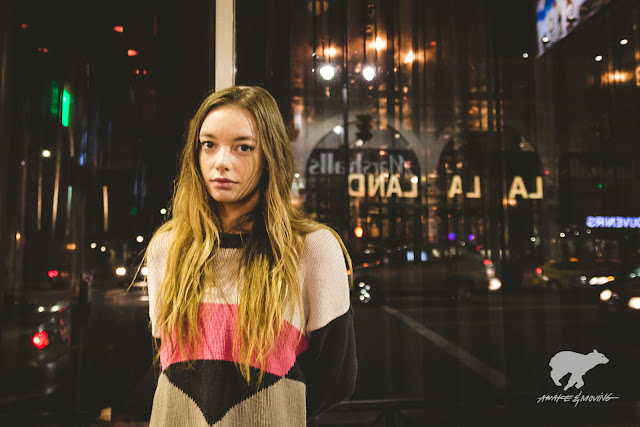 After about 24 hours on the road, several Red Bulls, a 30 degree drop in temperatures from Austin, and 40 push-ups at every fill-up, we drove into the great state of California, 1,300 miles away from Texas. We got in around dinner time, popped into King Taco, and then mashed out after sundown to strangest of stranges--Hollyweird. Hollywood is such a fun place to lurk about, day or night. I snapped the flik above on a girl's random smoke break. Serendipity. 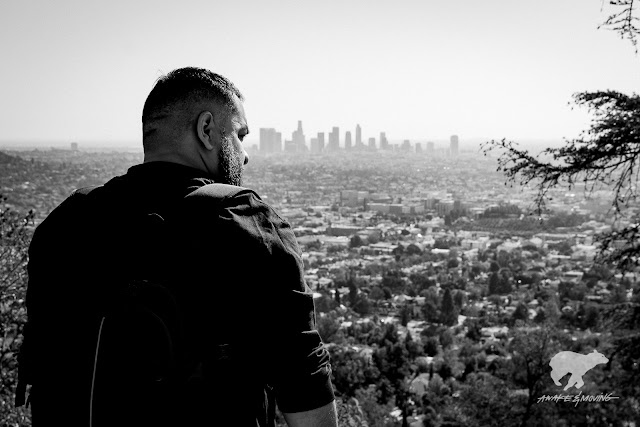 The homie Ren takes it all in.

The next day was Thanksgiving and I was honestly so happy to be away from any celebration of it. I've disliked the idea of that holiday for so many years. I appreciate my family every day and still see no reason to make such a big deal about a day whose origins reside in genocide. I know, it's a bit much, but it's how I feel. Does this stop me from joining my family every year for Thanksgiving?--of course not. It felt nice though to take a year off from the holiday and just live it as a regular Thursday. After breakfast we headed to one of my favorite places, Griffith Park. 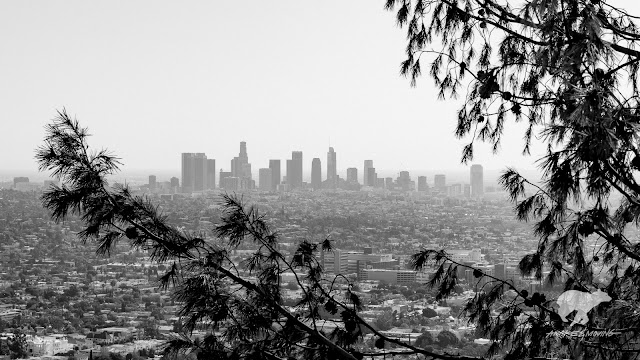 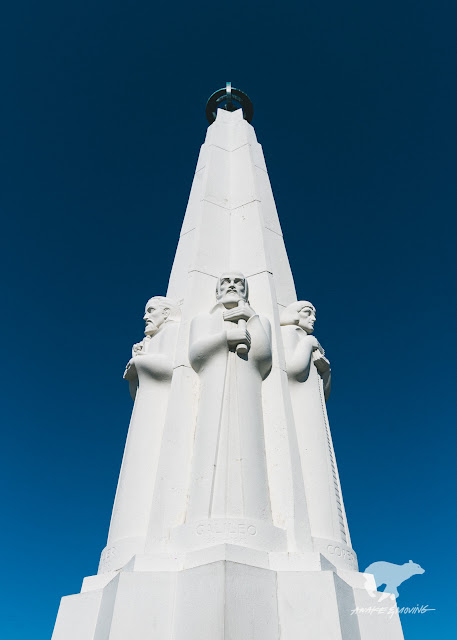 This man was imprisoned for believing in a heliocentric universe. Galileo spent his latter years on house arrest because the Church convicted him of heresy for his astronomical ideas. I take this photo every time I come here.

I could stay here all day, but you gotta keep it moving. Next stop was Venice. 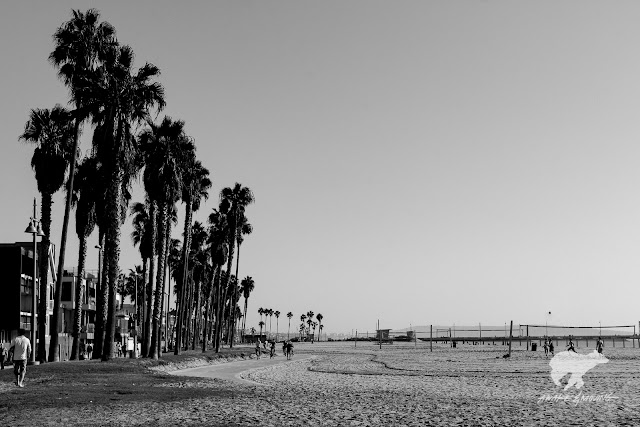 One of my favorite things to do is walk the boardwalk from Venice to Santa Monica. It's such a great view and watching the shift in architecture and people is always fun. This trip didn't see much of Santa Monica, but we did spend several hours here, lurking and waiting for sunset. No sign of Ev anywhere. Bummer. 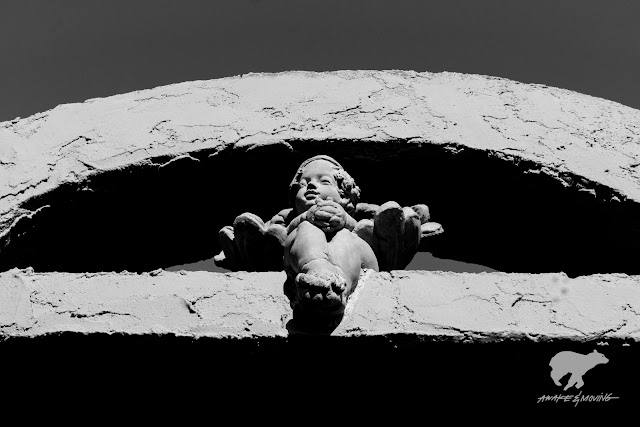 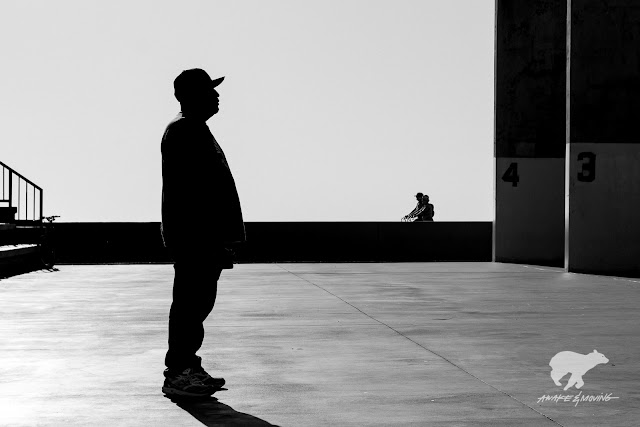 Handball courts are a must in Venice. I love watching people play.

Walking along the sands of Venice still provides a surreal feeling. It's indescribable being here. The breeze, the breezys, the painters, the waves, the skatepark, the vendors and performers...Venice is such a great place to just walk around, lurking and people watching while slowing down your thoughts. 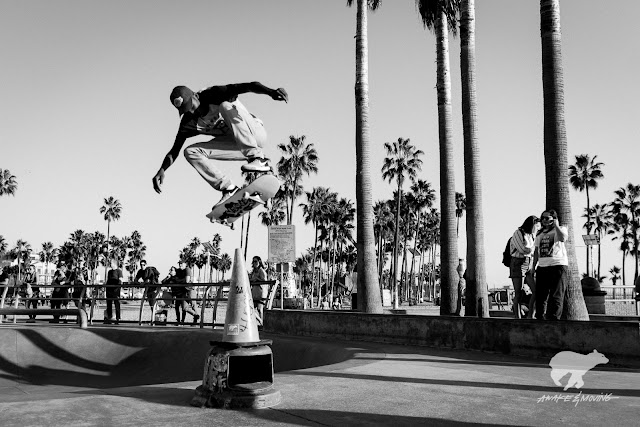 A little sesh at the skatepark... 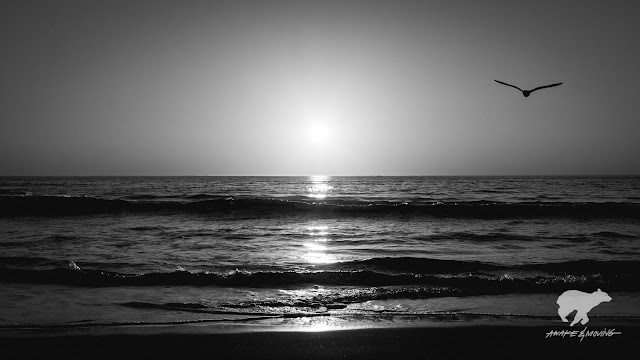 And then a little bnw sunset... 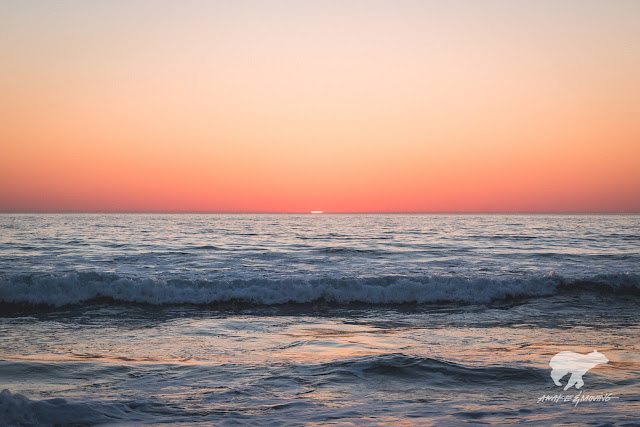 Come on, like I wold deny y'all these colors! ;D 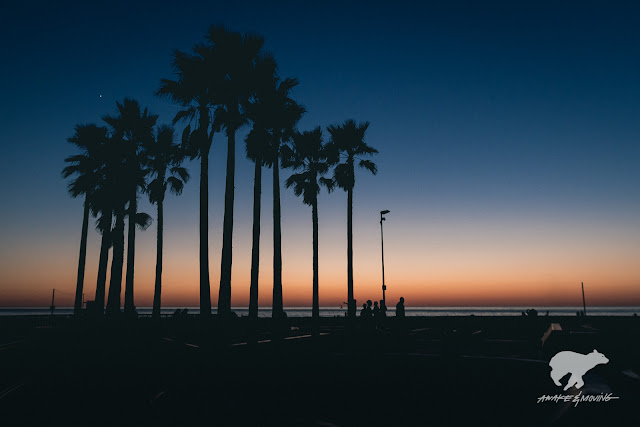 When the lights go out and Venus says "Hello."... 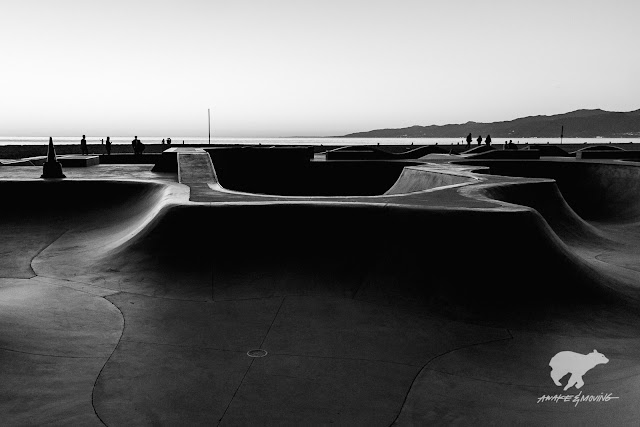 Then 5-0 tells the skate rats to go home and you decide it's time to dipset too.

Friday we went through the Arts District. I don't have any photos from here. Straight up, so many of the murals are gone. Walls that would usually cycle different artists were now buffed with solid colors, no art. What a drag. I felt some sadness that the outskirts of DTLA, all those industrial corners and buildings, are seemingly under gentrification and the art suffers. Of course, LA is huge and there are plenty good walls. It just sucked to see my favorite mural haunts gone. The ROA animals partially buffed. The MEAR, RETNA, and HOWNOSM walls gone. Gone-diddly-on.

We later met up with one of Cory's homies from IG and took us to a bridge with a sic view of the trains. 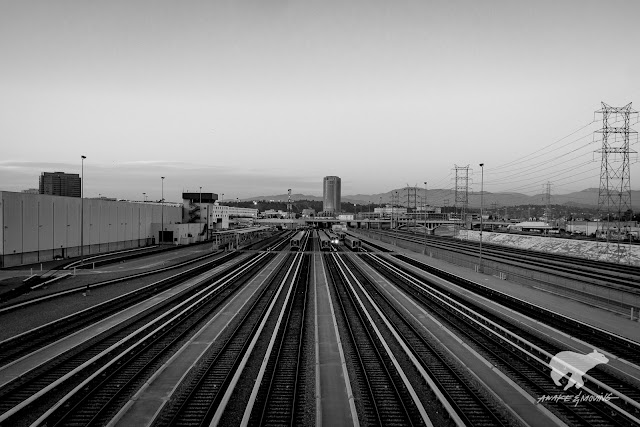 After dinner we made our way to Griffith for a skyline view at night. I was surprised to see that most people were at the observatory and off the trails. I sat at this spot for several minutes alone with Ollie taking in the city. It was a spiritual experience to be up here at night and just converse with the city... 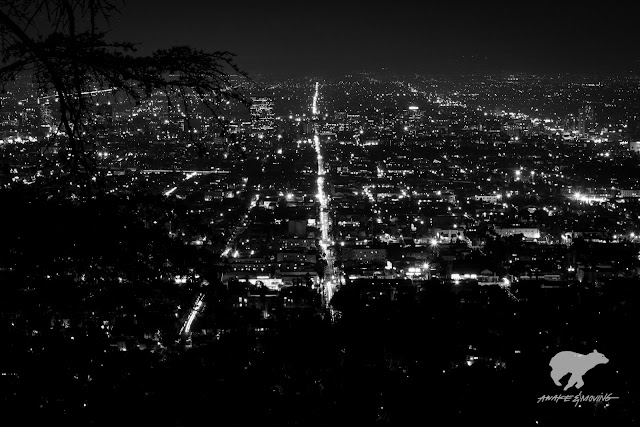 Thank you for the conversation and insight...

Shortly after Griffith, we met up with a fellow SA homie, Jason, who showed us another great view of the LA skyline. Jason and his lady recently moved out to LA and it was a great feeling seeing some hometown in my other hometown. I only wish I had a sharper lens on me, but I love how the city is framed in a small valley here... 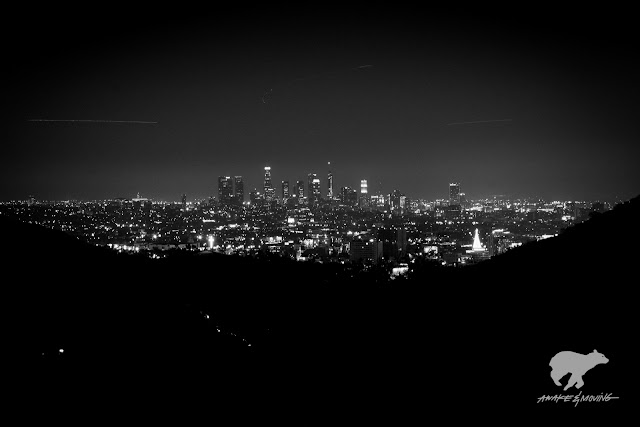 The last day we decided to drive down PCH a bit to Long Beach and then Huntington Beach. After getting kicked off the pier (fuck your "No Dogs" rule btw), we got slammed with rain and super high winds. The shops nearby provided good cover and good coffee though--shout out to Java Point in Huntington Surf & Sport. The long drive back to Texas began earlier than we all wanted as we decided to head out after the rain subsided.

For myself, I had several moments of clarity on this trip. I was nervous and started to think they weren't gonna show. Patience is virtue though, and they eventually came through. I got what I needed out of LA, even if it wasn't everything I wanted. Like an extra week from Texas lol. Until next time LA, I know I will see you sooner than later.

S/O to Pasadena for some great morning walks with my dog and a sweet Air BNB. Thanks Griffith for the views and the conversation with the city. S/O my SA peeps Jason & Michelle at Babinka for some great eats and treats--Pink's was so damn good! S/O all the great food we had that I didn't photograph for once and just enjoyed eating on the spot. Big shouts to all the strangers and new faces I met and shared life with. My heart goes out to all of you Angelenos living in fucking TENTS--shit is real out there, y'all, and it hurt to see so many in need & how normalized it is. S/O Pacific Ocean--you were cold af this time around, but I love you all the same. One time for Fairfax and all the people that kept the stickers I gave them. Two times for Five for opening up The Hundreds at midnight, reminding me what Awake & Moving will be some day. Two times too for all the coffee on this trip.

S/O my dog Ollie for being down af on these urban adventures as much as the natural ones. You always want to keep walking even when you're clearly tired. Big ups to Ren Dog for staying level-headed and to Cory for being a risk-taker--it's a good balance to have both in your daily life. S/O I-10 for a safe & faster trip back to Texas. Thanks to California weather--you're the most consistent ever and it was a great break from the random ish we get in Texas. Thanks to anyone and anything I can't think of rn. 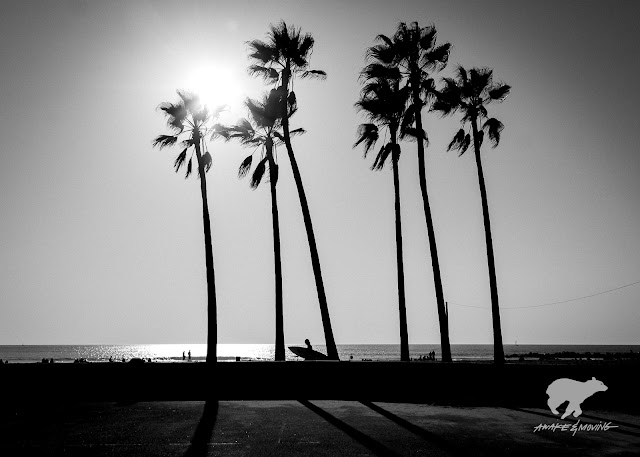 Thank you for always welcoming me...

Thank you California for keeping me close even though Texas can feel so far away. I love you. I will see you soon. 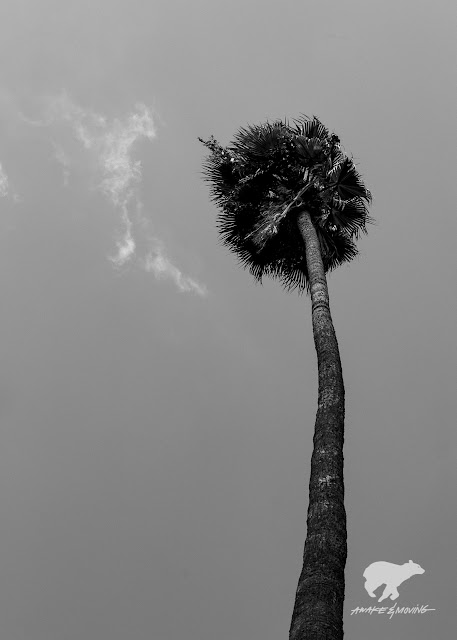