There's something about a roadtrip that is simply inspiring and invigorating. Whether a short hop or a long distance, a good road trip can be extremely satisfying and quick to clear up any creative cobwebs one may get from being immersed in the minutiae of everyday life as an artist pushing to break free from the monotony of a nine-to-five. It's real out here. California has been considered home to me since the first time I stepped out of the car after a long drive from Texas and set my feet down on the asphalt of San Diego. "I'm Home", I said to myself as I walked downed the road to Tr1ckster. But that's another story for another time.

California has a very wonderful vibe. From San Diego to Santa Monica, the laid back lifestyle and endless breeze is always welcoming, even with the LA traffic and smog. I've made many trips down to SoCal, but had yet to make it up north up until earlier this month. A couple of my homies from Street Keepers, Cory and Ozzy, along with myself and Ollie, decided to embark on a post-summer trip to the West Coast. We picked out a few personal goals we could reach as a group, packed Cory's car, and hit the open road for a much overdue return to California. I'm used to making the trip back home every year, however the past two years had seen me relocating from Texas to Phoenix, moving to California for a very brief time, and ultimately landing back in Texas. It had been far too long since I was there. My time in California hardly ever seems like enough.


Stopping off I-10 for a smoke break. 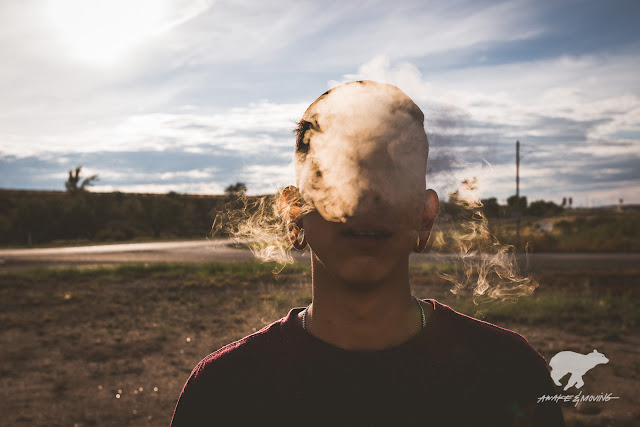 As we were driving, another homie I met through Street Keepers hit us up to roll through on our way out West. Zero is my yung homie that I met last year when I met Cory and is easily one of the funniest people I know and helped me realize that although life has it's serious moments, it is also an open playground for jokes, tomfoolery, and good times. Zero moved out to Santa Fe last year to attend art school, so we all decided to stop in even though it would be at an obnoxiously late, post-midnight hour. Perfect.


Zero telling us about all the wacky "art" that he's witnessed in his time there. The table on the mural is by far the best one yet. Surprise cameo from McDonald's pancakes and a sus jacket. 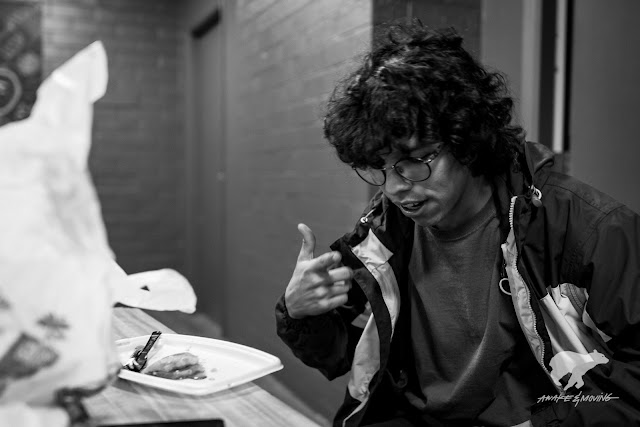 As much as we all wanted to stay and continue with our shenanigans, we had to get back out onto the road. After driving through the night, passing up a meat packing plant/slaughterhouse while I slept, seeing a crazy huge NASA complex when I woke, and travelling through what seemed like endless vineyards and orchards, we found our way to the very small town of San Juan Bautista where we would camp up a mountain for the night. We literally raced up the mountain to make sure we would get into the park before the gates were closed at sunset. We barely made it, as we stepped foot out the car to catch the view. I wanted to take a photo but I knew I'd miss it. I told myself, "Just watch it with your eyes, for once," and then three, two--boop. Gone. It was super amazing to see the Sun drop off from a tiny semi-circle to nothing but a shade of color. I then decided to take my photo. But the moving Sun saying "good night" to the World, that image was just for me. 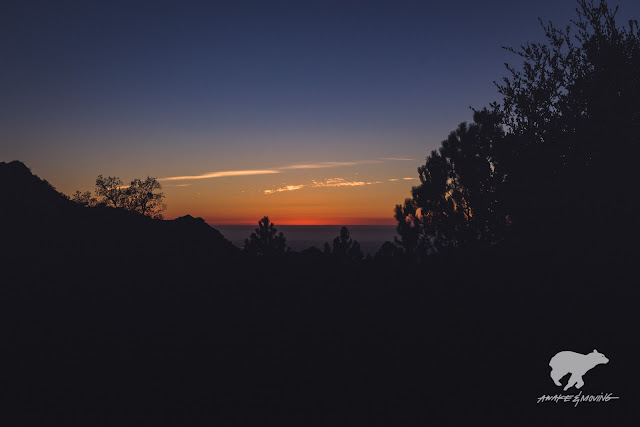 Ollie looks out into the woods of our campsite, enjoying all the new, foreign smells. 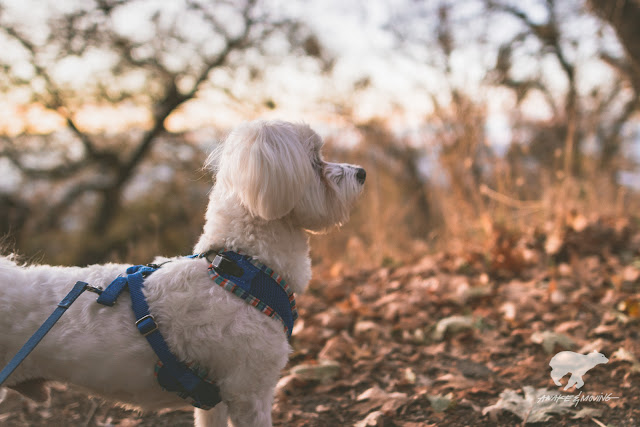 From our campsite to the peak was a walk about ten minutes or less. After we parked, we decided to forgo setting up our stuff in favor of seeing the rest of the sunset from the top. There is an amazing view from there and we all knew we'd be back in a couple of hours when all the sunlight was gone for some stargazing. When we reached the peak at night, the nearby city lights looked like a giant pinball game with more lights than necessary. I took some shaky shots of the city lights as the wind picked up.

And then I took my gaze upward... 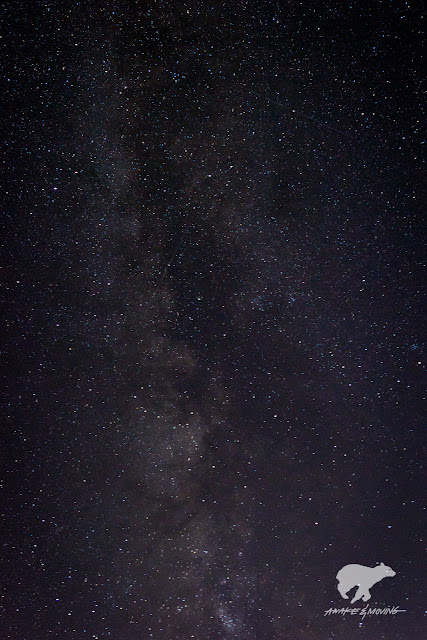 There she was, in all her splendor. The Milky Way. At first I was just taking random photos of stars until it started to creep into my frame. I flipped out and looked up with my bare eyes. And I could see, with my naked eyes, the Milky Way, and a sea of other stars and galaxies. My jaw dropped, my heart skipped a beat, and the entire world stood still for me for a few moments. It was easily one of the greatest things I have ever seen and it was made even more special for myself because I was in California, on top of a mountain, with Ollie at my side. I was texting my brother as I was shooiting and told him what I saw. He asked if I was smoking weed or dropping shrooms. I said neither, it's really there! He still doesn't believe me. You know, you can catch this view from all over the world, even in Texas, but I had to drive over 1,700 miles to see it. Funny how life works.

We made our way back to camp and all agreed to be up super early to catch the sunrise at the peak. I'm not one to be up before six, I don't even like being up before 7 am, but for this sunrise in this location I was happy to make the exception.


With a cool breeze and the homies close by, I watched the Sun greet the world a happy "good morning". 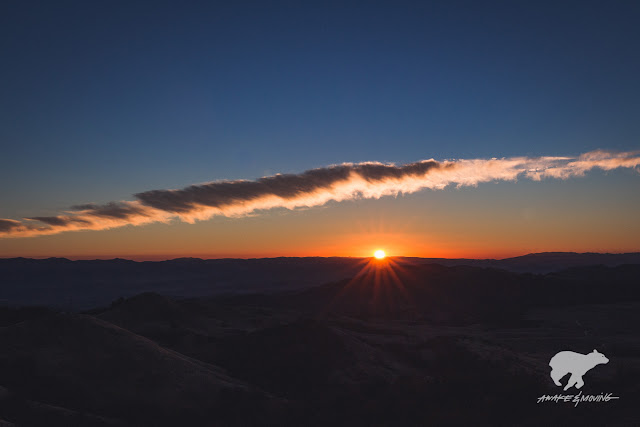 Ollie takes in the sunrise with sleepy eyes. 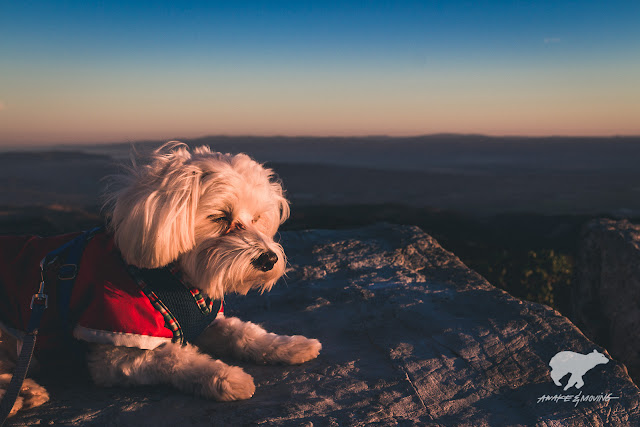 We took into the neighboring city of Salinas after we packed up and drove down the mountain. Looking for breakfast, we found ourselves in the middle of a car show. It's little random finds like this that I love about roadtrips. This trip was much more different than others I have taken as the goal was to travel while travelling. To cover more ground other than staying in one city, which is what I normally do. This allowed us to see and experience more than one area and little car shows like this are all the more worthwhile.


One of my favorites was this ill Chevelle. 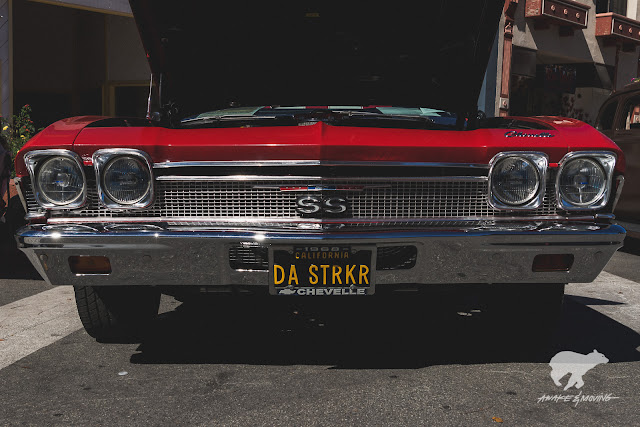 Although biker culture never really appealed to me or was part of my upbringing, as a designer I am always intrigued by their vests. This one was too gnarly to pass up! Demonic Souls, stand up! 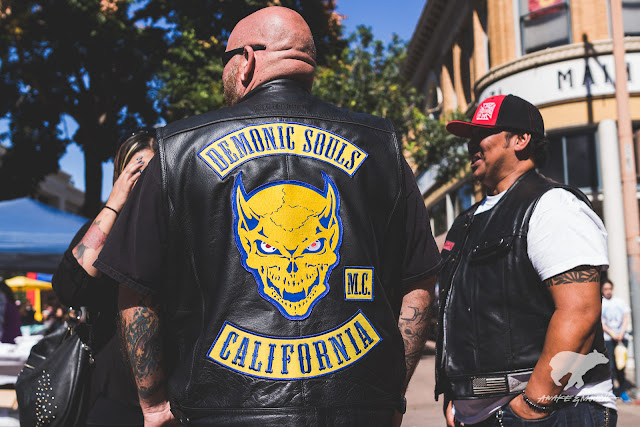 We then hit the road travelling out of Salinas and to our next destination, one of the reasons I wanted to make the Northern California trip this year as opposed to SoCal--Big Sur. Part 2 of this journey will cover that in great detail, so stand by and get ready for lots of water.


My favorite selfies are hubcap selfies. Not a new thing for me. 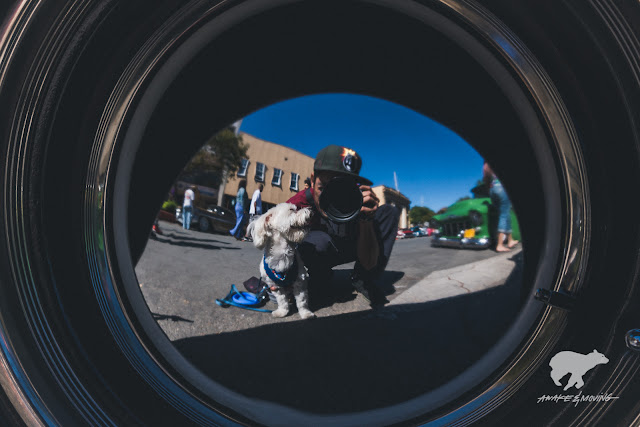