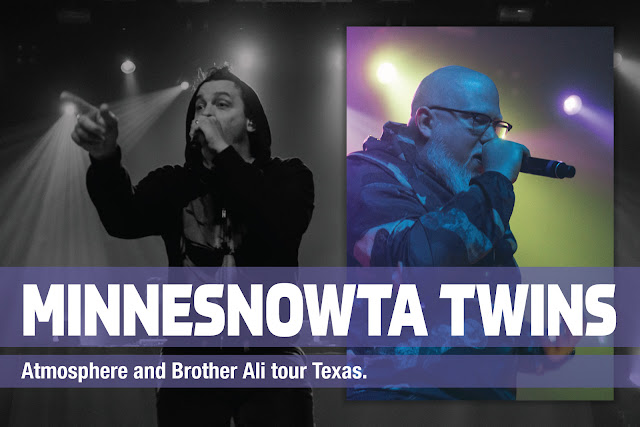 I've been trying to catch these two for YEARS, straight up. That I can recall, Atmosphere has only been to San Antonio once, back in the early 2000's, and Brother Ali the same I'm sure. I had no idea who Atmosphere was until a week after that show back then. "I missed these guys by a WEEK!?", I remember saying out loud at work one day when I first played "Trying To Find A Balance." I kicked myself quite a bit for skipping that show the week before. About 8 or 9 years later Atmosphere was returning to S.A. with someone heavily responsible for most of my body of work back in 2010-2011, Brother Ali. 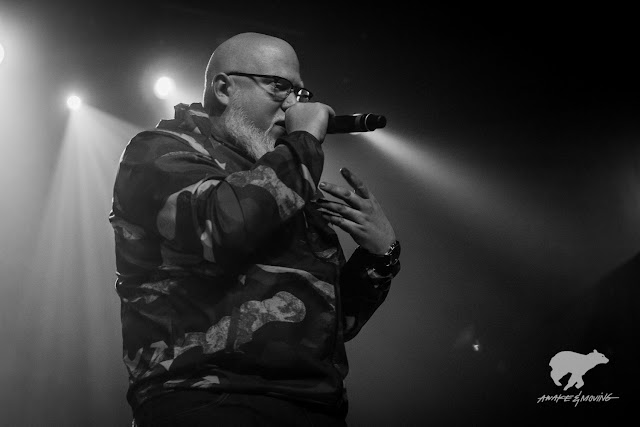 Welcome to the United Snakes...


Ali's music was what I would listen to more than anything back in my live painting days. Crank my headphones up and the world around me would disappear for a few hours. Same thing on my table at home, most of the music coming through my speakers was either Ali or Jedi Mind Tricks. I created a lot of dope shit to his music. I got wind that Ali and Slug would be returning to San Antonio this year and I got pretty stoked. Ironically, I ended up booking my photo pass for the Austin show. Funny how life works out. 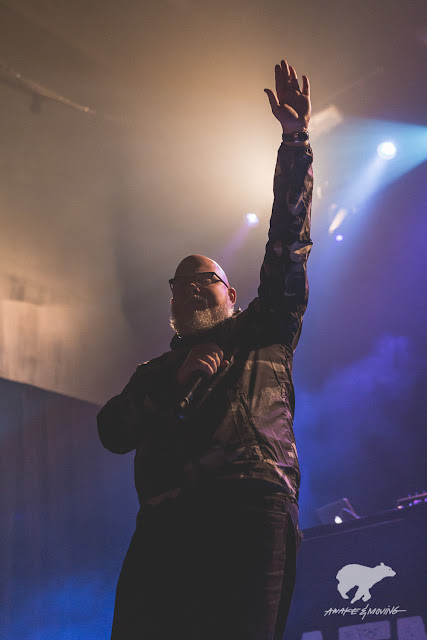 The Undisputed Truth in tanglible form. 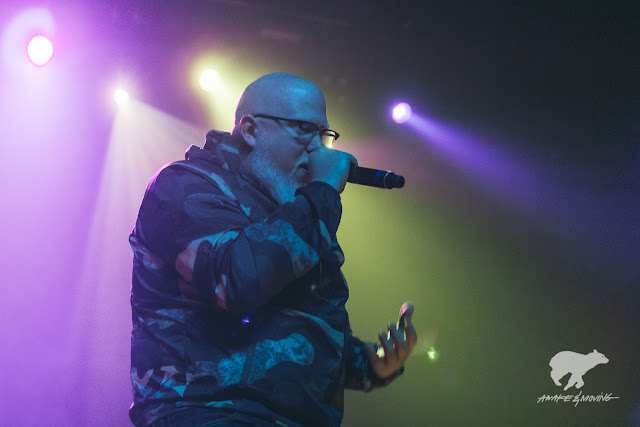 "Legacy so ingrained in the way that we think, we no longer need chains to be slaves."

After one of the most hellacious trips up I-35 I've experienced in a long time, I barely made it into the venue mere minutes before Ali's set. I was pretty bummed I missed the opening acts because Rhymesayers books some dope acts on their tours. But, life is what it is and I was happy to catch Brother Ali's set in time. Ali's music carries an energy of strength and a vibrancy of soul that is unmatched by any other out there. He is one of the few musicians I can feel through the sounds and words he produces. Faced with a childhood of ridicule and strife due to his physical appearance was something that did not stop Ali from being himself and pursuing what he loved. His career is a testament to staying true to yourself no matter what. That in and of itself is something to celebrate and is why I love his persona so much. 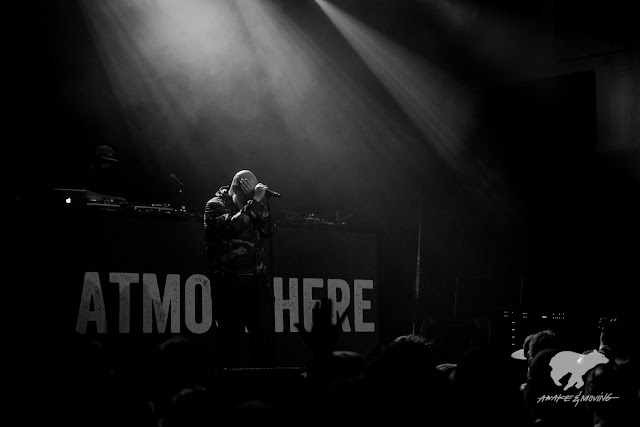 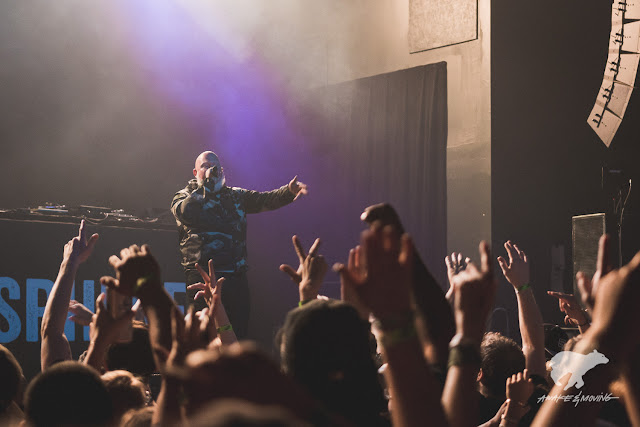 "Come alive Austin give me whatcha got."

When the lights came back on and Slug was on stage I felt a surge of energy inside. Something I hadn't felt in a long time at a show and it was dope. I've been listening to Atmosphere for over a decade. His music has always hit a strange part of the psyche for me and even after a decade, he's still got it. Every single step. 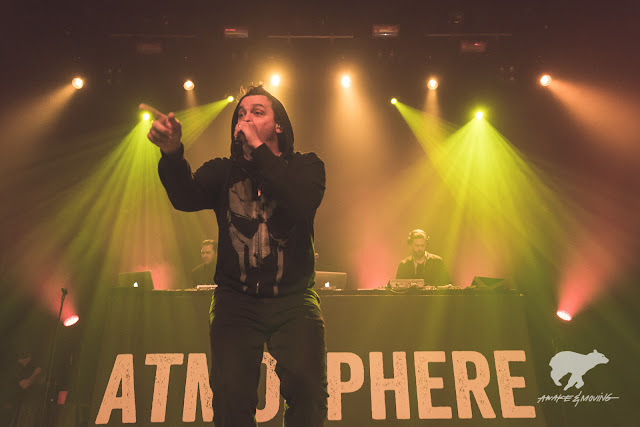 Slug hits the stage with a strong presence. 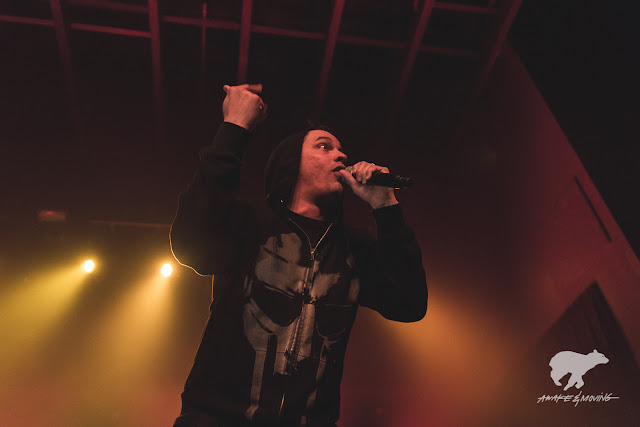 The energy is surreal.

I've seen Atmosphere's music change a lot over the years but from all the videos I've see, his stage presence is still effortless and commanding without demanding your attention. It's weird. There's a spookiness in Slug's performance that is almost immediately thrown out the window when his inner clown permeates the barrier of grim seriousness. And we get to see who I feel is the real Slug-a fun-loving guy who loves what he does: Expressing his life through music. 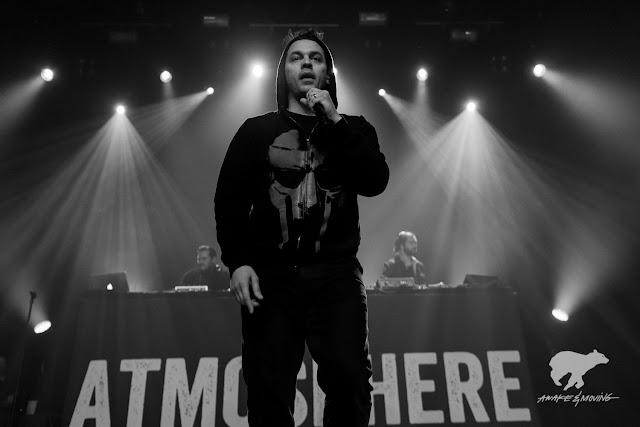 Braggadocio or self humility? Slug embodies both seamlessly. 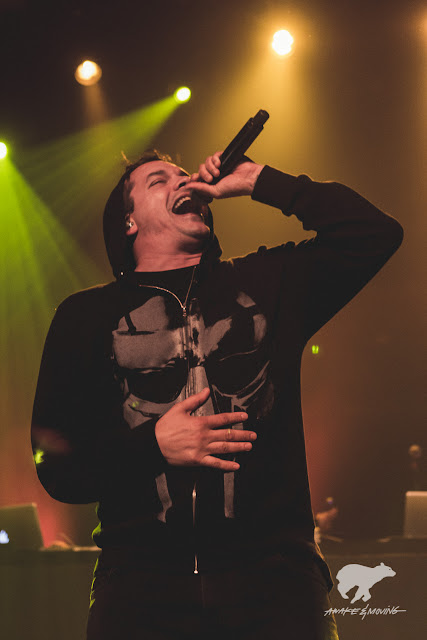 Slug trying to have the best day of his life.

The Rhymesayers independent label was started in part by Atmosphere and it changed the face of underground rap. With a roster including DOOM, Brother Ali, Grieves, Evidence, Blueprint, Grayskul and, seriously, a TON of other talented acts, Rhymesayers continues to push boundaries and produce record after record, tour after tour, of some pretty stellar work. A lot of artists can create great records. How many of them can create a greater label and completely change the face of a region as well? 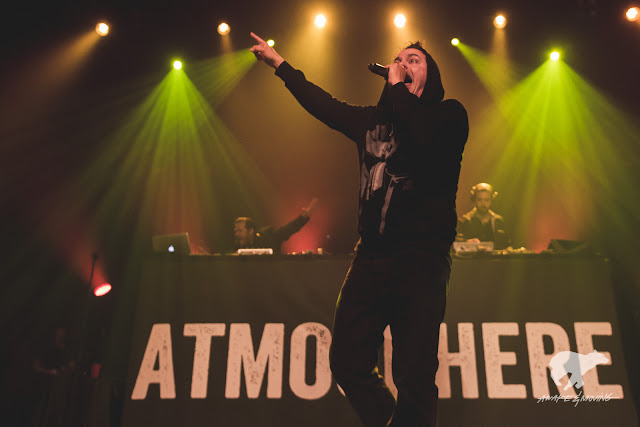 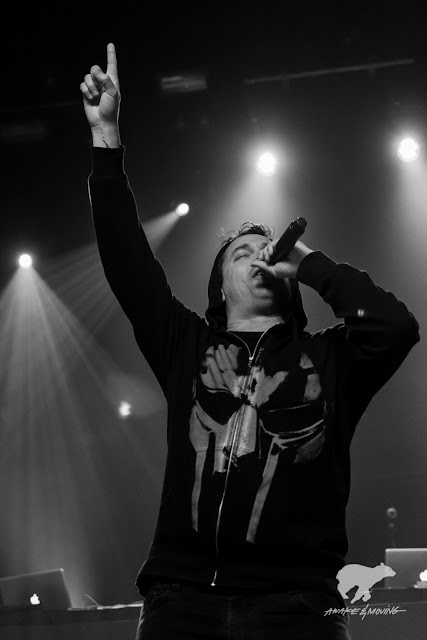 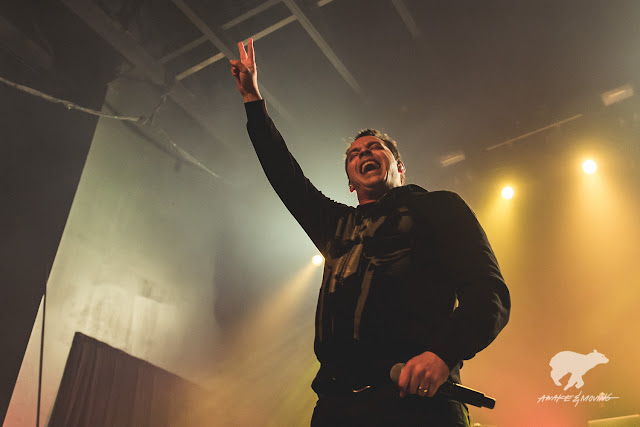 Atmosphere put on a great show and I couldn't have been more stoked to see the magic happen. From "Yesterday" to "Trying To Find A Balance" to "The Waitress", the set was stacked with many personal favorites. It's not often we get to see Atmosphere or Brother Ali in Texas, let alone in the same night. To say it was fun is an understatement when, at one point in the show performing Felt's "Dirty Girl", Slug asked everyone to take out their phone and essentially blow up Murs' Twitter with "@Murs where the fuck are you? Austin Texas misses you! Motherfucker!" tweets. 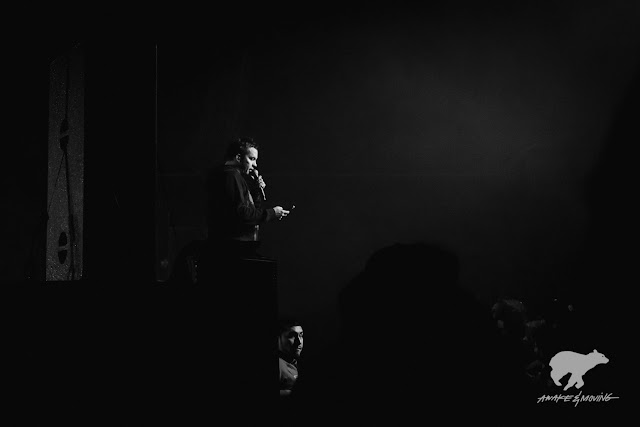 I wonder how many tweets Murs got? 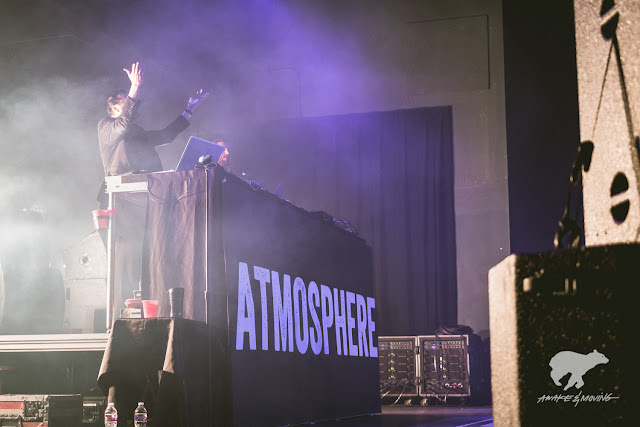 After a solid set of tunes, Slug opened up his emotions even further with Flicker, what most people think to be an emotional ode to Eyedea. In fact, it's Slug's reflections and phases following the death of Eyedea. The house lights were shut down and Slug asked everyone to turn the flashlights on their phones to join in the song. 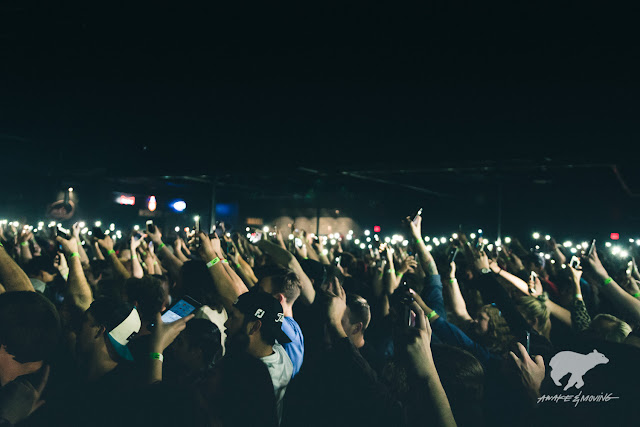 After these emotions, Slug invited Brother Ali and Haphduzn to join in an old school cypher. I can't express how dope it was to see some dope heads spit freestyle--TRUE FREESTYLE--bars on stage and kill it. It reminded me of the old Wake Up Show and the Eyedea v. Brother Ali battle from yeeears ago. Yeah, ish was real back in the day, no writtens. I gotta say, it's super refreshing to see this still happen from the bigger acts today. It's almost a given to catch a freestyle cypher at all the local shows from underground artists. To see it from some heavy hitters on a big stage was super dope. 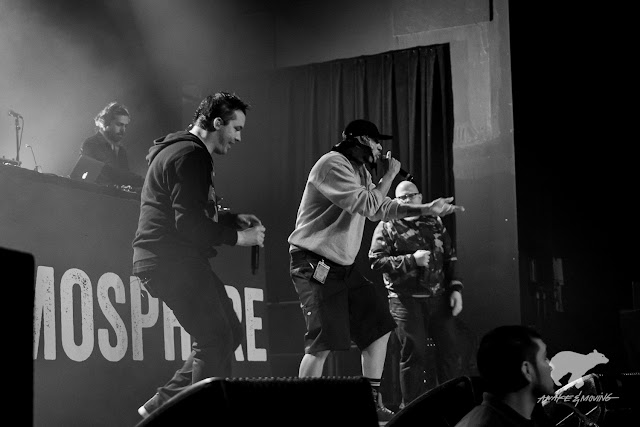 Through RSE and their own efforts, Atmosphere have paved the way for a lot of artists and embodies the idea behind Awake & Moving by not only pursuing what they love, but helping to put others in the spotlight. Awake & Moving is a platform. For local artists and international ones as well. It's organizations like Rhymesayers that show me what is possible with an idea, motivation, and hard work. 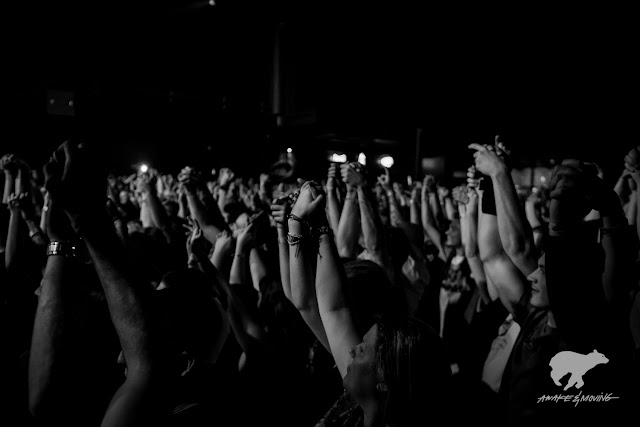 We must remember that we are all one and that we gotta help each other out. Speaking of which, thank you Ren for lending me that lens when my local spot fell through. Thank you Atmosphere, Brother Ali, Haphduzn, Rhymesayers, and Austin for a really dope show. Let us all make every day the best dayof our lives by pursuing what we love, what we are passionate about. 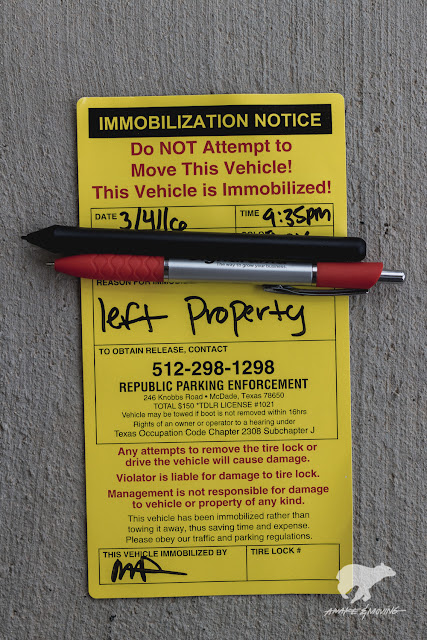 But a big "fuck you" to Republic Parking Enforcement for this $150 boot removal for parking in an empty ass Pizza Hut parking lot. Poachers. There's better ways to earn a buck than prey on working class people utilizing AN EMPTY PARKING LOT. I'll be sure to make 10 times this amount using this experience somehow.