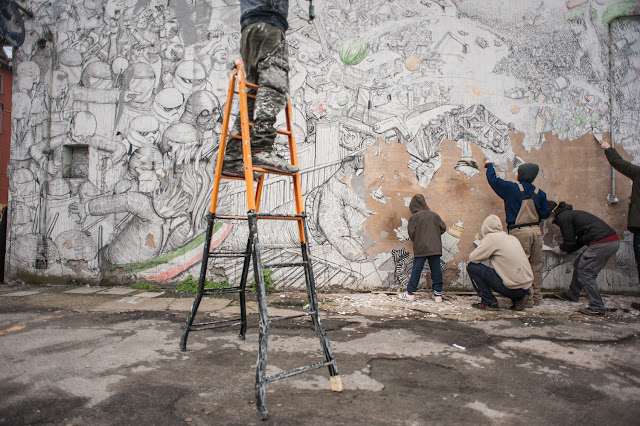 As Flanders once said, "It's all gone. Everything...gone-diddly-on."

This Easter I was met with some unsettling news. The world renowned street artist BLU had recently buffed all of is murals in Bologna, Italy in protest of the removal of some of his street art (without his consent) that was to be included in an art show of other street artists, whose works were also removed without their consent, meant to preserve street art. Oh the sad, depressing irony. I stumbled across this article at random on Twitter through a RT of another world renowned (and a personal favorite) artist, SABER (MSK). After reading this article, I began digging more into the story. With every word I read, I felt my stomach turn in an ocean of knots and my thoughts become a rain-soaked race of sadness, anger, frustration, and contradicting joy. I understood his actions immediately: This is an attempt to keep his art form pure and to keep it out of the hands of money-hungry, greedy pigs. To protest the contradiction of a city (like many cities across the world) that criminalize street artists and simultaneously praise the art form for its commodity and, often, its possibility to generate money for those in power. I don't care what people say about preserving street art--it's not meant to be preserved in such a manner. Especially for profit and privatization. The removal of street art for the purpose of private sale is frustratingly ridiculous. It's public art, after all.

I haven't told many people why I have numbers after my name (let alone what they represent). But I will tell you all now that when I chose the name BLUE731, I did so in an attempt to never be mistaken for BLU. Blue is my birth name and for that I am happy. I love drawing and painting and walls are a canvas I enjoy painting as well. When I first decided on my name, I had (and still have) high ambitions for my work. To someday have murals on the sides of buildings across the world is something I would often dream about and is still something I'd like to accomplish. After making this decision, I wanted to be sure that no matter how "big" my work or my name ever got, I didn't want anyone to ever think I was riding another's wave or worse, trying to usurp the name of BLU. I respect him and his work far too much.

After a few moments openly discussing with my lady what had happened after I read these articles, I felt my eyes begin to swell. And then I burst into full-on tears. I became so upset that, because of greed, an artist had to take things into his own hands and destroy 20 YEARS of his own work. Murals I will never get to see in person. ART that belonged to THE PEOPLE of Bologna--not some greedy politicians. It took my mind to a place many artist often visit when attempting to make a living creating. That place where you begin to question if what you are creating is for you or for a dollar. When you begin to sell more of your work, it's easy to begin catering to what you think others will want, what will put food on your plate. It becomes this spiraling ping-pong of self-doubt, self-questioning, and often worry that we will change when we become dependent on our art to sustain us.

What happened in Bologna is happening everywhere. With every stolen Banksy, with every stolen SPACE INVADER, with every stolen whatever, the public takes the hit. (The stolen SPACE INVADER piece in San Diego is personally upsetting as it was the first of his I ever saw during my first trip to California many years ago. It sat atop the Blick art supply in Little Italy, a really dope neighborhood of San Diego.) People live in these areas and if you are fortunate enough to live in a city with even small murals, you know what beautiful art can mean to you. To your neighborhood. To your city. While the debate will rise of who street art belongs to, it's no doubt to virtually any artist out here that street art is a connection between the artist and the public.

It belongs to the people.