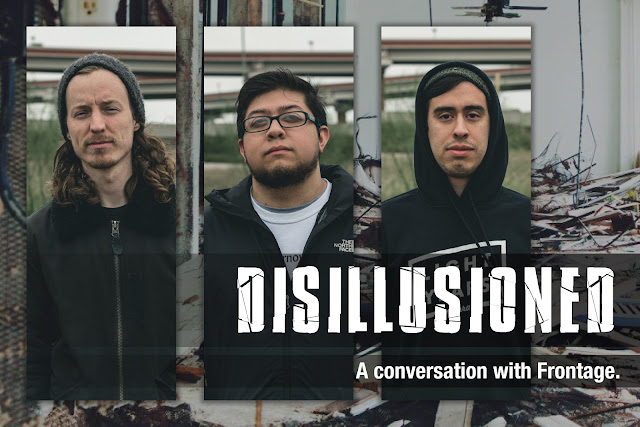 It’s funny. You never really know which direction a chance meeting will take you or what tangents that journey will travel. Over a year ago I started Street Keepers, a community of photographers that has since expanded to include monthly meetups, art shows, musicians, and other creative projects from its growing members. I met Vince through SK several months back thinking photography was pretty much his only creative outlet. As judging a book by it's cover often shows, there was more to Vince's creativity than photography. I soon found out that he is also a talented musician with just as much passion for sound as he has for imagery. Vince plays bass for Frontage, an alternative rock band based out of San Antonio TX that includes two other great talents, John (strings) and Marc (drums). In a freakish cold snap on a Sunday afternoon, I met up with the guys of Frontage to talk about music, passion, and persistence. Oh, did I mention we have the entire Disillusioned record streaming here, exclusive to Awake & Moving? Yeah, take a listen and read through.

BLUE731: Your latest record Disillusioned is about to be released, how do you feel?
JOHN: Relieved. We finished it in May, lost contact with our engineer. By the time we started getting mixes back in September, we weren’t really satisfied. In October he gave us his final mix & master and it wasn’t what we wanted so we went with somebody else.

How was overcoming that huge obstacle with your prior engineer?
J: It took more input from us. We let our first engineer go in blindly with little direction and he couldn’t understand what we were going for. With the mixing of the final record, we were there for every part of it. Everything was approved by us before we started the mastering process. It took hours, sometimes eight hour sessions once or twice a week. 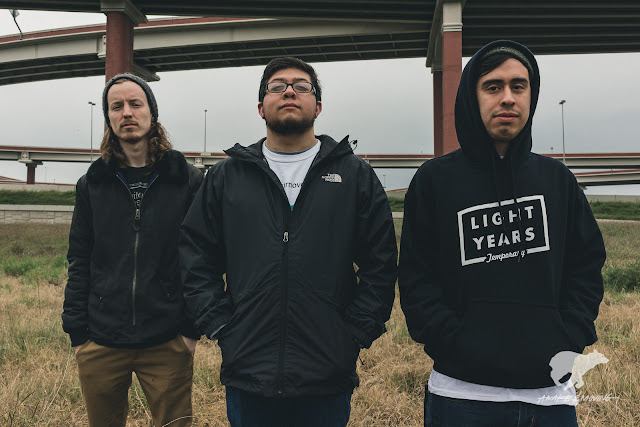 I met Vince through SK as a photographer and had no idea he was in a band until later. How did you three meet and form Frontage?
J: Vince and I were in a pop-punk band with a guy I met in school.
VINCE: When our previous band started disintegrating, me and John wanted to start something else. We immediately knew we wanted to continue our music. Our previous drummer stuck around to drum for us and gave us the okay to find another drummer. We put out an ad on Craigslist. After a few months we were about to give up. Then Marc sent us a message.
MARC: I had just moved here and I was really craving to write music.
J: We went to lunch at Peter Piper and set up a practice day. As soon as we started jamming, I looked at Vince and was like “Yeah, this is the guy we need.”
V: We knew right away what was gonna happen.

What were the early years like for this current trio?
J: Rough. It took us a while to give Marc total freedom. Vince and I were kinda stubborn on the direction of the band. Marc wanted to take it in a slightly different direction. I told Vince we gotta let him do it, he’s a talented drummer, let’s see what happens and here we are. 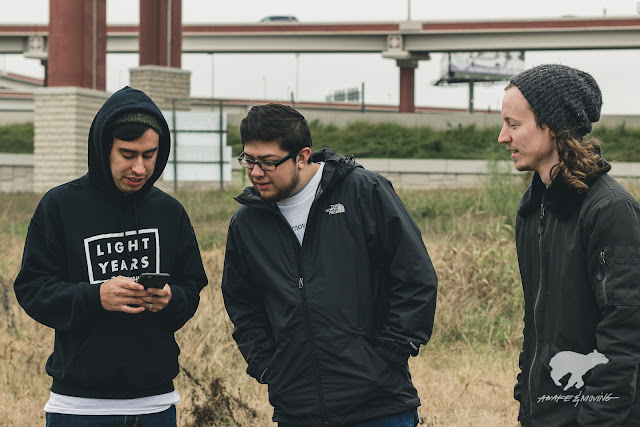 Let’s talk sound. I often find myself having trouble describing your sound to people because there are hundreds of thousands of subgenres to everything today. How would you describe your sound to someone who doesn’t know you?
V: Alternative. Straight up, Alternative. Exactly like you said, I try not to go into sub-genres. I don’t like sub-genres.
J: The opposite of Nickelback.

What is the goal or idea for Frontage? What are you trying to accomplish?
J: Writing is a special way I deal with my life. There’s really no goal. We’re doing this to let out our demons. We get together to jam and put everything from the day behind us. It’s all so that I can keep my sanity.
V: It’s the same with me. I’ve never had another form of expression to let my feelings out, besides Frontage. I’ve never really done that before, you know, write my feelings down. I just want our music heard across the world, basically.
M: It’s my way to express myself the way I can’t with words.

What do you guys take from live shows?
V: That’s honestly my favorite thing to do. I’ve always been kind of a shy person so being in front of a lot of people, there’s energy that the crowd gives me to continue to do what I love to do and it kinda just feeds back and forth.
J: I love playing to the same people . Somebody asked me once, if we could play to complete strangers or to people who have already seen us, which would I pick and I would rather play to people who have seen us perform because they can see how far we’ve come. That gives me motivation to keep getting better. 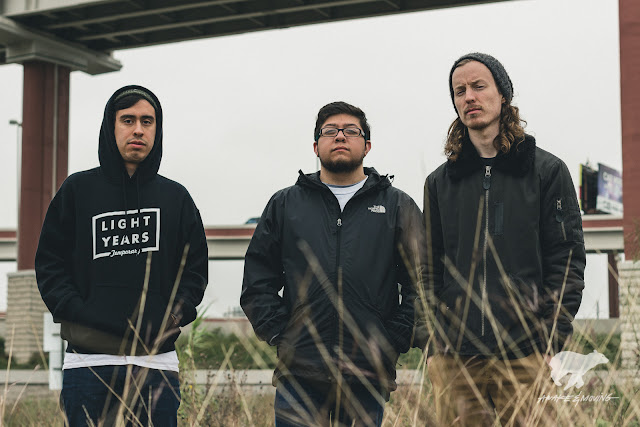 We all skate and we definitely need to roll soon. Outside of music and skateboarding, what other creative passions do you guys have?
J: I like sports. My whole family is into sports. The idea of a game, trying to figure things out to win. I guess, this music is like a game, we just want to overcome every obstacle and win.
M: I enjoy learning. Science and trying to find answers to questions I have.

Ok time for some complete-the-sentence play.

If I could play a show in any city across the world, I’d like to play…
J: I’m gonna get really specific...a basement show, in New Jersey, early 2000’s. A lot of the bands from Jersey changed the way things were done. Taking Back Sunday, Senses Fail, The Early November...it seems like a special time to be part of that scene.
V: I’m gonna have to agree on that one.

If I could collab with any musician, dead or alive, I’d choose…
V: Geoff Rickly from Thursday.
J: Kendrick Lamar, like a live instrumentalist. Or Outkast! If I could play keys for Outkast..that’d be the life right there.
M: Someone from, like, old jazz.

What motivates me most as a musician is…
J: To keep getting better. And definitely my family. They spent a lot of money supporting my dreams with lessons, guitars, gear, or whatever I needed.
M: Through music I express my desires, my desire for the world to learn to love. Knowing that my music can speak to someone and show that desire, and my love for music in general, keeps me going.
V: My wife, Rebecca. I’ve never had as much support in pursuing my passions as she’s given me. She really pushes me as far as I can go. 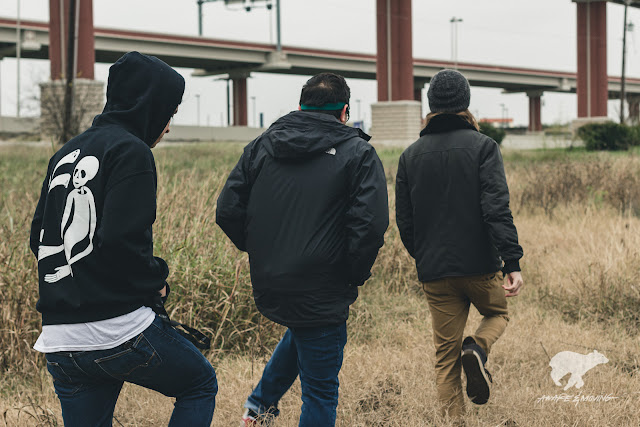 If you would like people to know one thing about Frontage, what would each of you say?
M: That we’re real.
J: This is our life. There’s no in between, it’s all or nothing for us.
V: We’re in it because we love to do it.

And you gotta respect that. 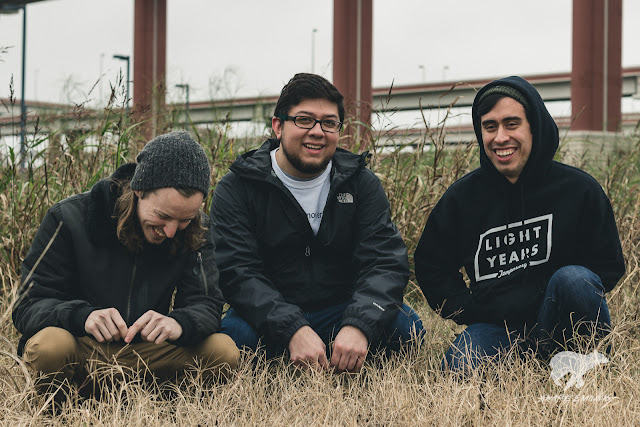 Be sure to pre-order the deluxe package of their new record Disillusioned here, available now. Get the record on iTunes, Play, and Spotify as well as other online outlets, January 1st, 2016. But let's be serious, that deluxe package is far too dope to pass up.
Posted by BLUE731 at 8:13 PM