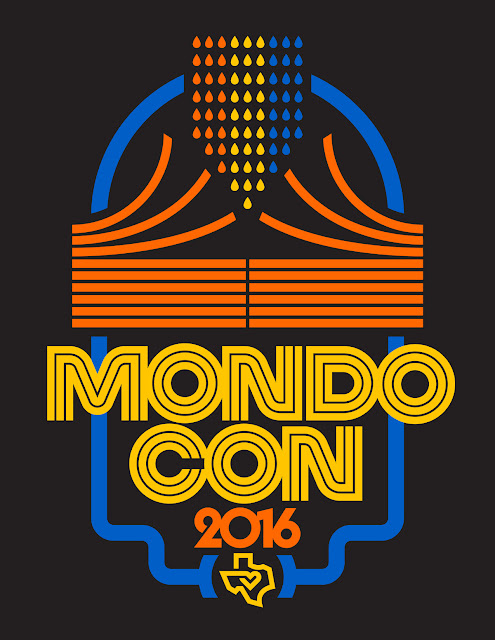 Mondo Con 3 may have come and gone, but I'm still feeling it's effects. From incredible art posters and insightful panels, to great food trucks and people who support the arts, Mondo Con is a must see for artists, designers, and anyone who enjoys highly technical art & posters. Now in it's third year, Mondo Con was created by the great people at Mondo Tees. Bringing together some amazingly talented artists under one roof for a highly creative weekend, the Mondo Con team was gracious enough to let me come out and see what the event is all about firsthand. 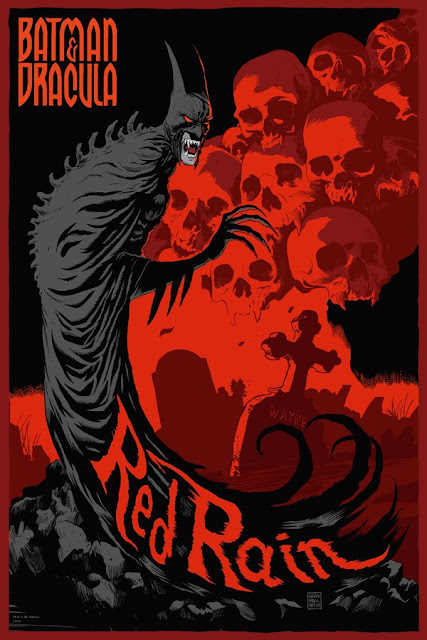 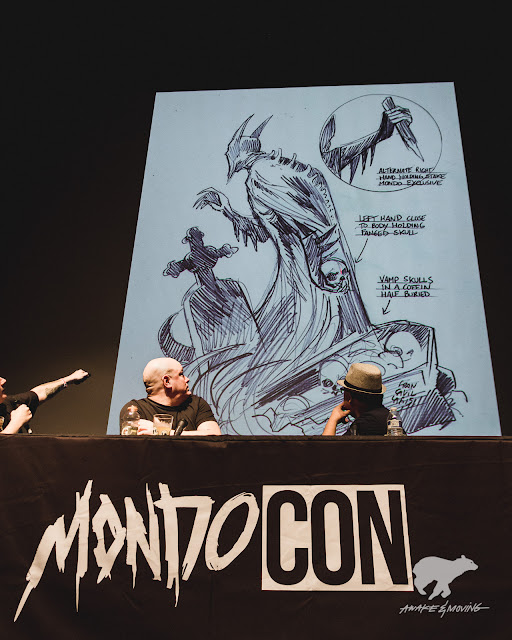 Sculptor Phil Ramirez and artist Francesco Francavilla during the discussion of the details of the back of the Batman Red Rain statue.

This was my first Mondo Con and to say I was excited is an understatement. If there's one thing I've really loved since moving to Austin is that there are so many great shows and events that happen so often and I know longer have to scramble to find a 90-mile ride; I can simply take a bus or even just skate to some of these events. For Mondo Con, I was particularly excited about the panels. I geek out hard on process and BTS, so attending the first panel, "The Art of Toymaking", was a no-brainer for me. The panel, consisting of sculptor Phil Ramirez, and illustrators Francesco Francavilla & Matt Taylor, gave some in-depth looks at how flat posters are turned into 3D masterpieces. The amount of work that goes into taking a poster to sculpture is insane often spanning two years from approaching the artist to final delivery. In an ever-increasing digital world, it's nice to know some things are still created in an analog fashion. Most notably, the shag carpet on Matt Taylor's Harley Quinn statue, coming soon from Mondo Tees. 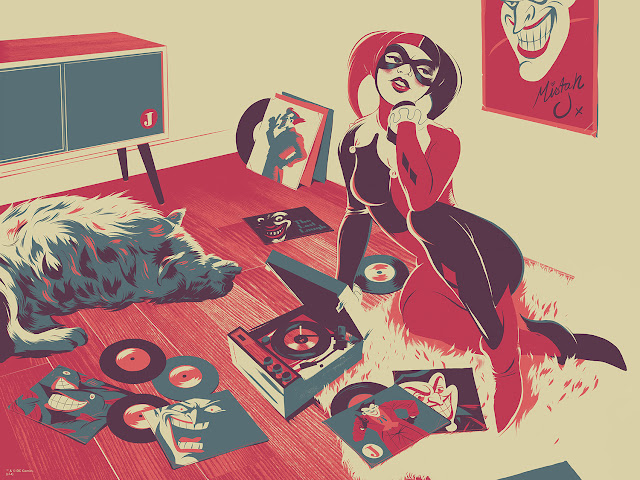 Harlequinn by Matt Taylor, who is super down to earth. The statue prototype looks amazing.

Mondo Con brings the heat with the food trucks. With all the options, I personally had to go with Austin-favorite, Frank. I mean, their menu consisted of a hot dog inspired by Aaron Draplin. How cool is that? 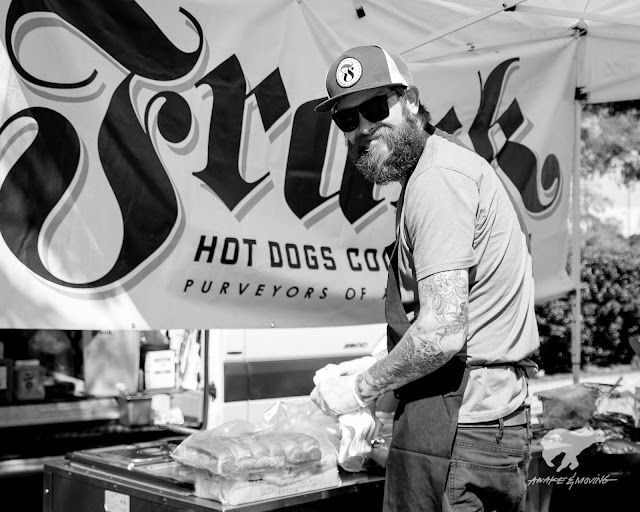 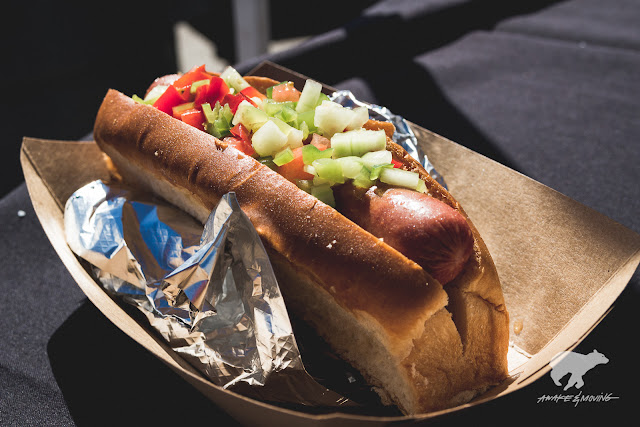 Ladies and gentlemen, I give you The Draplin. 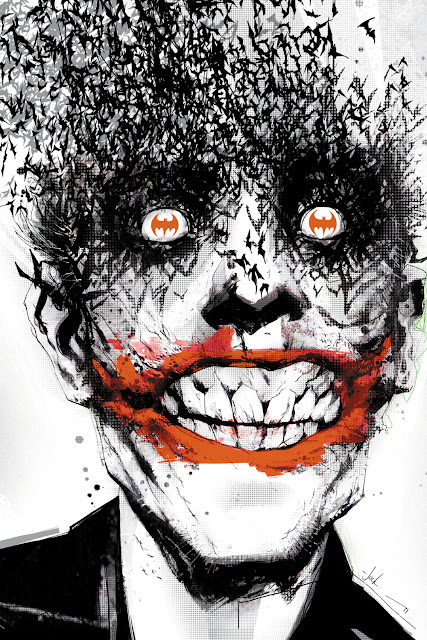 Cover art for Detective Comics #880 by Jock. This was the introductory image that got me into his work. By far one of my favorite comicbook covers of all time.

Listening to the stories of one of my favorite artists was a suuuper dope. Jock's work is very kinetic and I was drawn to his stuff immediately many years ago when I first saw this image. His use of line and halftones get me super excited and I often find my eyes dancing around the images he creates picking apart all of the little details. From countless Batman pages to Raid & Raid 2 and Ex-Machina movie posters, to so many other movie concepts and books like Walking Dead, Jock continues to surprise and inspire me as an artist. During the panel, Jock and company shared some behind the scenes looks at the creation of his new book, The Art of Jock. A massive collection of Jock's work, this book weighs a ton and is a marvel of its own. 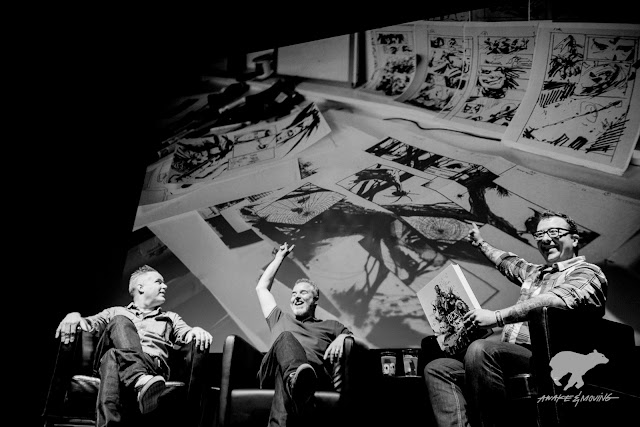 Jock, all smiles during the panel. 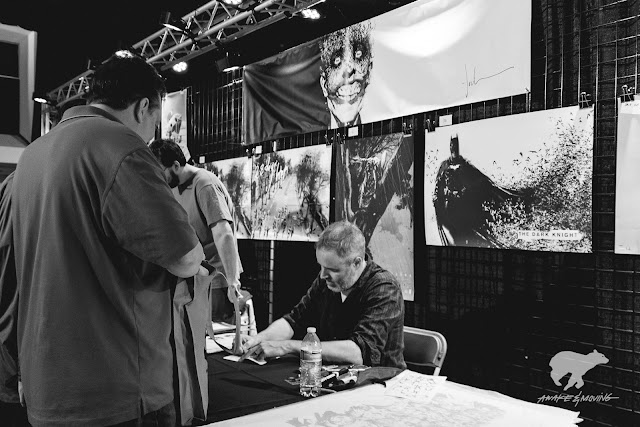 Wrong day to forget your sektchbook. Still kicking myself for that one.

When I started reading about Mondo Con I came across some news I was super stoked to read. The beast-man himself Aaron Draplin not only created the branding for this year's Mondo Con, but he would also be in attendance with his world-famous pop-up shop as well as a panel of his own. Sign me up. 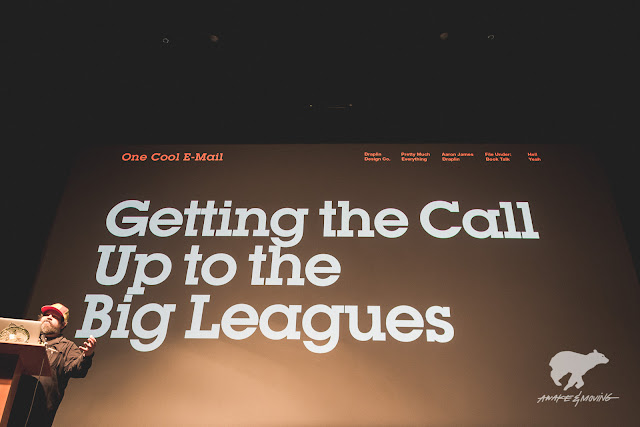 The man, the myth, the large man with many tall tales, Aaron Draplin.

If you haven't had a chance to check out Draplin's new book, Draplin Design Co.: Pretty Much Everything, boy you are missing out. Even if you're not a designer, this book is full of so many great pieces of art and stories on making it as a graphic designer that you are sure to enjoy it. The book is packed with sketches, walk-thrus, photos, lots of thick lines, and was the basis for his discussion with us. Reading the book is one thing, getting details how it came about is a nerd fantasy. If you've ever had the chance to watch on of Aaron's "Tall Tales From A Large Man" talks, imagine that but more centralized around the creation of his book. Aaron Draplin is such an entertainer but don't be fooled by his charm, because as great of an entertainer as he is, he is just as good (if not better) of a designer. You know those Janoskis all the skate kids are wearing? Aaron designed the logo on the tongue, yo. He also did work for the President of The United States of America. Dope, right? That's no small feat, people. Aaron Draplin is not fucking around. Some of that good ol' Draplin humor.

The Mondo pop-up was way too damn packed the first day, so I took a stroll on the second day and found a much more relaxed store (thankfully). The on-site shop had plenty of exclusive posters and a grip of figure and statue prototypes (including the Red Rain and Harley Quinn mentioned above). I posted a lot of these on my IG story [@awakeandmoving] during the event so if they aren't here, you missed 'em. I couldn't pass this one up though... 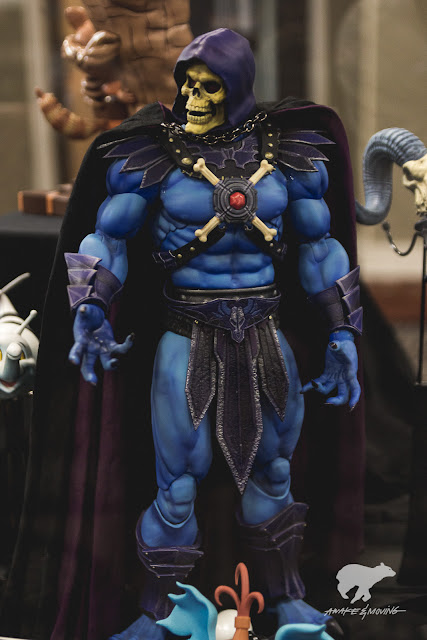 Straight from Masters of The Universe and Robot Chicken, this new Skeletor joint is deadly. 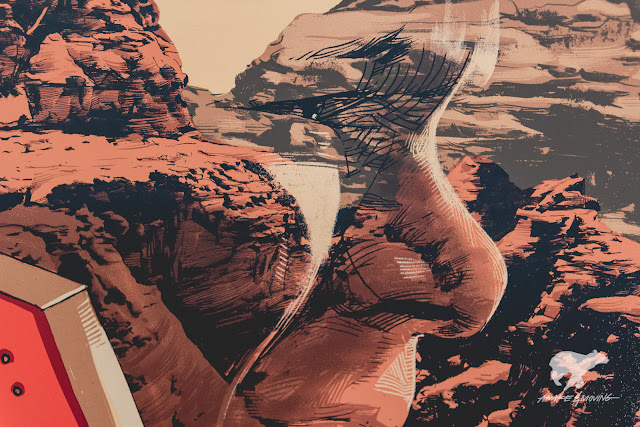 Detail of The Martian poster by Oliver Barrett. The technique in this screenprint is superb.

All in all, not a bad way to spend a weekend. For my first Mondo Con, I was super impressed and I am still feeling all the creative energy that was present. Thank you to the awesome staff at Mondo Tees and Mondo Con for making this event a breeze to shoot and fun to attened. And to all the creators that came through to showcase work and have discussions with a ton of art nerds like me--THANK YOU. It was so dope to be around such a great collection of work and see the details on some of these screenprints. Also, S/O to the barista from Wanderlust Coffee who braved the heat and kept me (and a slew of others) caffeinated for the entire weekend. I tip my hat to those wonderful beans!

To read all things Mondo Con and purchase a ton of other cool shit like posters, vinyl, and statues, visit mondotees.com. If you're in Austin, go visit their gallery as well and tell 'em who sent ya.